Enhance your property by laying a new patio – part #2 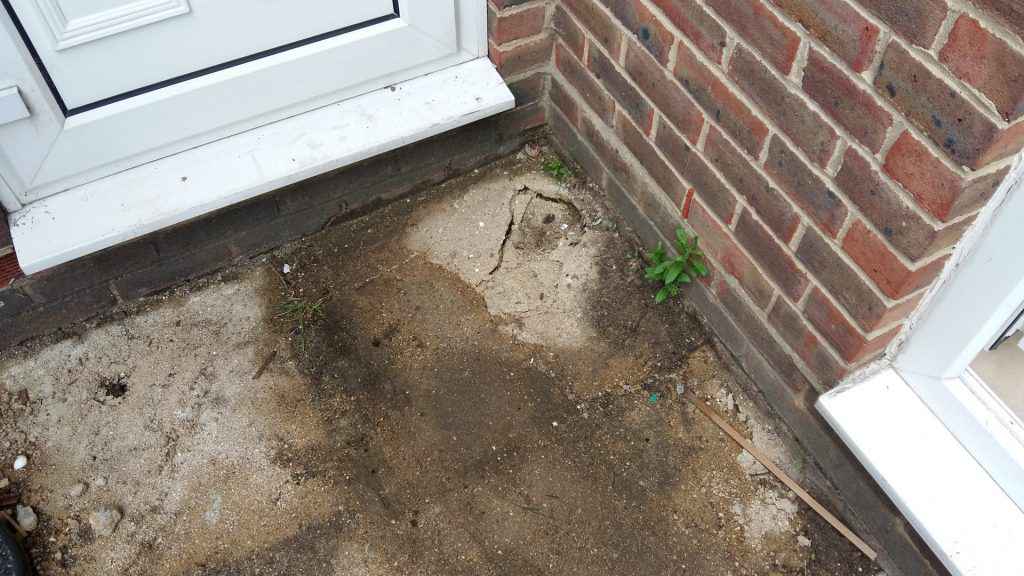 This is part 2 of the patio replacement project which we are starting for the summer. We have pulled up the old patio slabs revealing the thin sand base layer that the original house builders put down.

Be careful when pulling up the slabs and using hand tools like a pickaxe or shovel or power tools such as a breaker to remove earth that you do not damage any underground services like water supply or waste pipes. It’s always a good idea to know where the services run and how close to the surface they are when digging out spoil.

Here you can see a drainpipe that is quite close to the surface where it exits the downpipe.

Round by the rear of the garage the slabs had sunken quite badly where they butted up to the garage wall. This was most prominent near the rain gutter downpipe which could highlight that there is a leak in the pipe below ground level which is washing out the substrate causing the slabs to sink.

To investigate this a large trench was dug in order to find out the state of the pipework.  A visual inspection revealed the pipework looked undamaged and pouring some water into the gutter showed that there were no leaks.

What digging down did reveal was that the garage had been built using a block and beam construction and the void under the floor had been left open underneath the outermost precast beam. Because the garage is single skin the wall had been built on top of the beam which meant there was no outer facing brickwork laid down to the concrete foundation footing level and therefore the void was open allowing the collapse of the patio substrate into the void.

In order to remedy this some pressure battens were glued to the brick and block piers and pressure treated gravel boards were screwed onto the battens underneath the outermost beam. This will stop the hardcore and type 1 that we put back into the trench from collapsing into the void underneath the block and beam garage floor.

Then the trench was backfilled with pea shingle, hardcore, and sharp sand.

Once the slabs had been pulled up and removed the next step was to work out how much spoil to remove in order to get the correct fall on the patio. This was done using a long spirit level and some stakes banged into the ground to mark the level of the top of the slab that would allow a fall of between 25mm per meter and 25mm per 2 meters. Then dig out enough of the ground to allow the required 100mm of type 1, 50mm of mortar, and then the thickness of the slab.

Add garden lights to your patio

Enhance your property by laying a new patio – part #5

Embarrassed by the state of your slate patio?