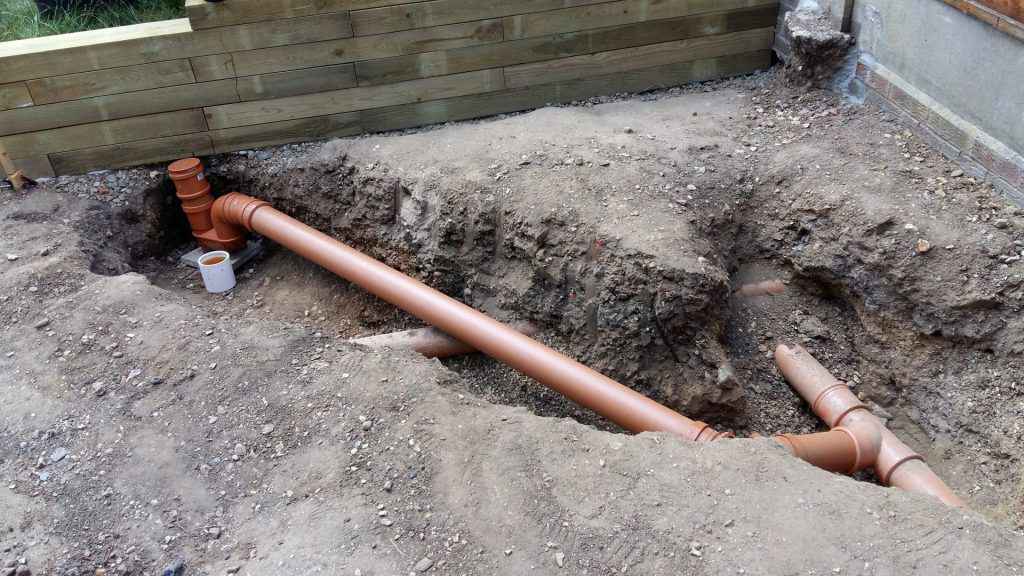 Round by the garage and the back door of the property the wall of the garage is built into the bank of the house next door. The gravel boards of the boundary fence also act as a retaining wall holding the earth back. Rainwater runoff from higher up the road runs into the patio area of the house and makes the external walls wet when it rains hard. There is a Damp Proof Course (DPC) that prevents water from penetrating internally.

To alleviate the effects of the surface rainwater runoff a channel drain will be installed against the kitchen wall and continued round at the bottom of the patio running parallel with a new retaining wall which will hold back the earth from the garden. The retaining wall is made of new sleepers of lengths 1.2 meters and 1.8 meters and widths 100mm x 150mm. A narrow trench was dug and filled with type 1 with a sand and cement base that the first lot of sleepers were laid on with haunching (cement support) applied to the back of the sleeper wall once the wall was finished.

The sleepers were staggered to match the height of the earth that would be retained behind the wall. They were cut and offered up dry to start with to make sure they fitted together properly. Holes were drilled in the sleepers to accept 1.2 meters long 20mm steel rods which were passed through the sleepers and hammered into the ground with 2 part polyester resin being used to glue the rods inside the sleepers. The sleepers were also glued in place with a quick setting Silyl Modified Polymer glue.

Once the wall was complete it was left for 24 hours to allow the adhesives to set properly.

The rainwater which comes off the garage roof is carried away by a gutter into a downpipe. An inspection pit was dug following the line of the downpipe from the gutter in order to trace where the water was draining too.

The downpipe exited into a 110mm 90 degrees bend by means of a flexible reducer pushed over the PVC pipe. The inspection pit revealed that the pipe went under the shared services foul water drainage pipe and continued into a soakaway. A trench was dug to run the pipe which would be teed off and run-up to the channel drain.

In order to carry away the water from the new channel drain, it was proposed that the rainwater drainage pipe for the garage roof gutter would have a tee placed into it and a new trench would be dug for a pipe to be laid and run up to a P trap. The use of a P trap was just to stop any possible gases coming up from the soakaway and exiting into the atmosphere at ground level through the channel drain. The P trap has a downpipe that joins the bottom of the corner joint of the channel drain. Here the pipe is cut to accept the slip coupling and double socket branch.

Then the slip coupling is inserted with pipe lubricant …

… and the double socket branch is inserted into the pipe.

Then a piece of straight pipe was inserted into the double socket outlet and a 90-degree adjustable double socket bend was inserted into that which allowed a long piece of pipe to be the run-up to a 15-degree bend and into the P trap. The P trap was placed on type 1 and then a piece of broken patio slab to give a firm base. Once the P trap outlet was judged to be in the correct place to accept the channel drain outlet 10mm pea shingle gravel was shoveled into the trench to backfill the space around the pipes.

You can also read – CLOAK-ROOM MAKEOVER