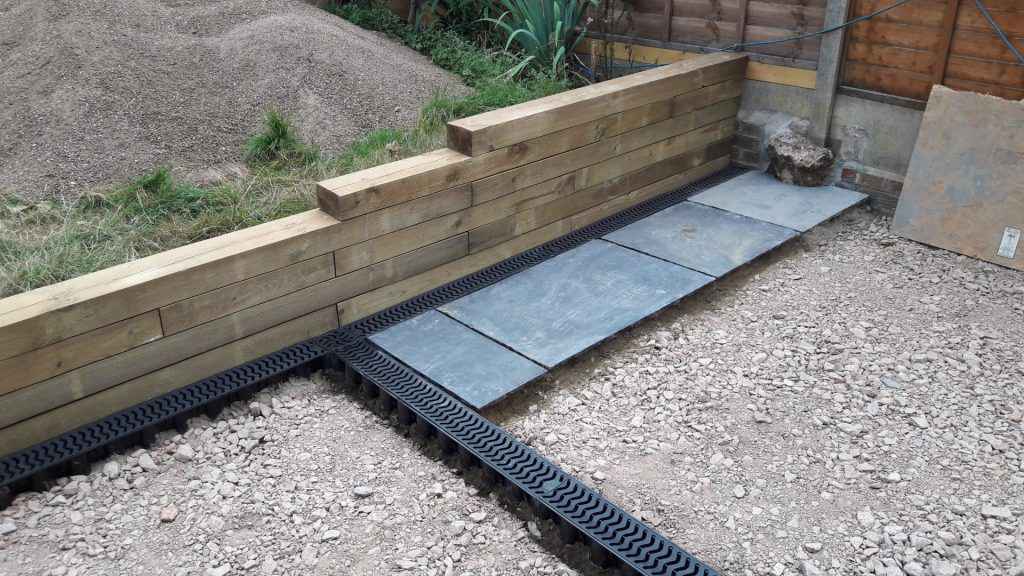 With most of the below-ground works finished it’s now time to start building the ground back up.
A green led laser level (more easily seen in daylight) was used to mark the highest point of the patio Then allowed for other factors like depth of service pipes below ground, the slope of the lawn, and distance of the slabs below the damp proof course (DPC) an amount of overall fall was calculated and then marked at the opposite end of the patio. In this case, a fall of 40mm over 6 meters was achieved which is a little under the desirable gradient of 1 in 80.

Stakes were banged into the ground and string run between them to mark the top of the slabs from front to back. Allowing for the thickness of the slab, 40mm for the cement base, and 80mm for the MoT type 1 sub base another string was run at the subbase level to show where the type 1 needed to be filled up to or ground shaved off to allow for the 80mm of type 1.

The ground was prepared with a pickaxe and shovel to make it the right level for the Mot type 1. Excess spoil removed in the process was sieved through an automatic rotary soil sieve to create a pile of topsoil and another pile of stones which would be used as the first layer below the type 1 subbase. Any difficult areas of the old concrete patio base were broken up with a hex shank electric breaker using a wide flat chisel.

Once the ground was prepared the stones extracted from sieving the spoil were spread over the proposed patio area as far as they would go and then compacted using a petrol compactor plate (wacker plate). Then the rest of the required thickness was made up by the MoT type 1 and compacted using the plate.

The next step was to set the channel drain. This was installed 3mm below where the top of the patio slab would finish and laid in a bed of 4 to 1 sand and cement. End caps were put on at the highest ends using PVC pipe weld cement and the lengths were cut to clip into the 4-way corner unit which joins into the top of the soakaway pipe via the P trap through a double socket coupler joined to a piece of pipe. A gap of 10mm was left between the channel drain and the wall to allow gun injected patio mortar to be applied once the patio had been laid.

Now it was time to lay the first patio slab. The first slab required a cut to make it fit around the base of the concrete fence post. The cut was made with the combination of an angle grinder and an electric tile cutter using wet-cut diamond blades.

The electric tile cutter has a tray that you fill with water that the blade runs through to aid dust suppression. A facemask, face guard, protective goggles, and ear defenders were used to protect the operators. Water was dribbled onto the slab while the slab was being cut to help the dust suppression process even more.