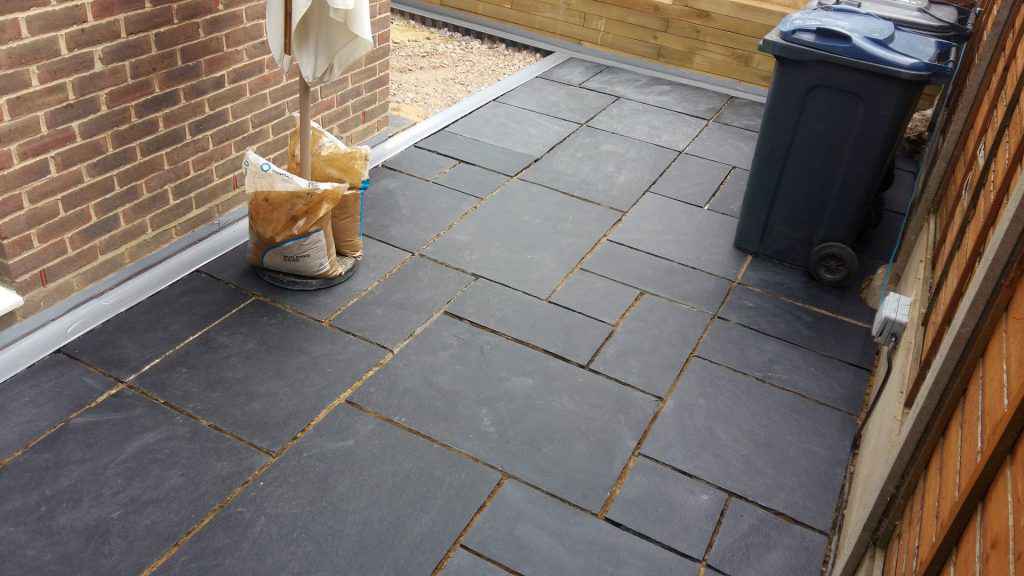 With the ground leveled, falls going the right way around the property and the MoT type 1 spread over and compacted with a petrol plate the slab laying is now well underway.

The cement was mixed with a 4 to 1 sand to cement ratio and some plasticizer was added to aid workability and the whole mix was made up in an electric cement mixer.

When laying the slabs the mortar bed was built up a couple of centimeters above the height that was needed to allow for the slab to be leveled once put in place.

The slabs were set a few millimeters above the edge of the channel drain and because the slabs had a waney edge they were set back at least 10 millimeters from the drain itself.

A rubber mallet was used to tap the slabs down in order to level them and a spirit level was used to make sure the slab was level with the surrounding slabs and also that the fall on the slab was going in the right direction. The cement was checked to make sure that there were no voids under the slab. On the smaller slabs to borrow a phrase from the tiling world the slabs were “back buttered” with styrene-butadiene copolymer or SBR for short to aid adhesion and stop them from popping up when trodden on although this will be mitigated by the grouting process.

Once the slabs were laid they were allowed to set for a couple of days. It was time to start the grouting process. The channel drains were taped up to protect them from the grouting process. A runnable cement mortar grout mix was being used. The mortar being used has structural properties to give the overall patio strength once all the bedding mortar and grout have been set fully after a few weeks. The mortar was mixed with the right amount of water in a bucket using a mixing paddle.

Once the grout mortar had been mixed properly it was placed into the mortar gun with a grout mortar piping bag having had the nozzle cut off to allow the mixture to flow easier. The mortar grout mixture in this case is fairly runny anyway and flows easily.

The grout was applied into the slab joints after well watering the joints and mopping up any standing water. The grout was allowed to sit for a couple of minutes before being struck off with a grout strike. A sponge was used to wipe off the excess from the top of the slabs being careful not to rake out the grout from the joint.

You can also read – MAKING OVER A TIRED BATHROOM WITHOUT BUSTING THE BANK.