Enhance your property by laying a new patio – part #6 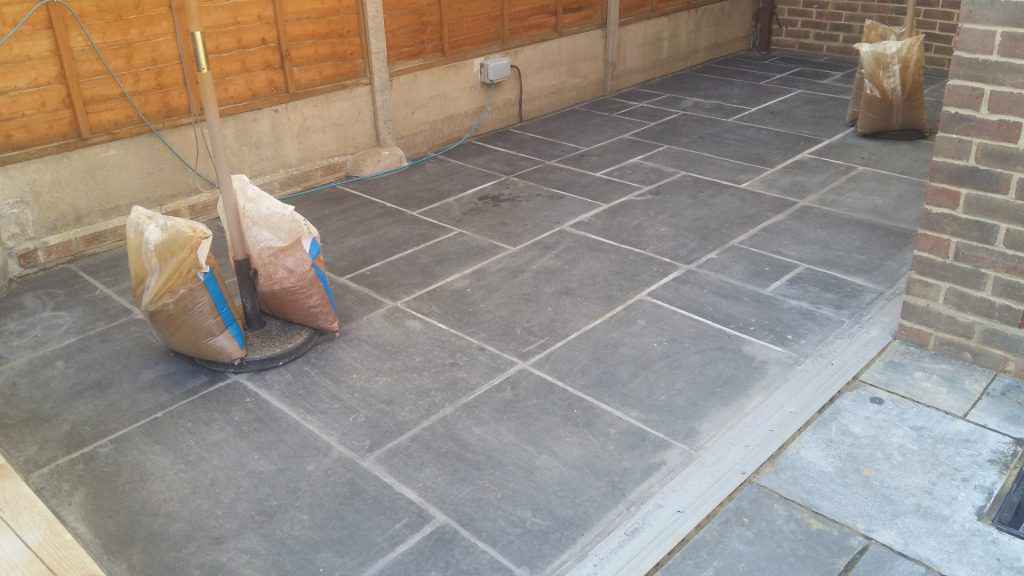 One thing you don’t want when you’ve just grouted your patio is to have torrential rain in the next 24 hours which is exactly what we got. The grout had time to harden to a reasonable state but the excessive rain did cause what is known as effervescence where the salts bubble up to the surface and cause white staining on the grout. The grout is supposed to be a charcoal gray color. We will have to let the grout harden fully for a few weeks and then deal with the discoloration by applying an acid effervescence cleaner to correct the problem.

Where the ground level had been graded and lowered below the concrete surrounding the fence posts this was structurally improved using bricks and cement render made up of 3 parts sharp sand to I part cement and some SBR to aid the mixture sticking to the concrete.

That is the patio at the side of the house was pretty much complete except for finishing and now it was time to move onto the patio around the back of the house.

Next, the riser for the inspection chamber needed to be cut down to allow for the height of the cover frame. The riser was marked round with tape to the correct height and then cut with an oscillating multitool. The burrs were cleaned up with a coarse emery cloth.

The height around the riser was built up with type 1 and tamped down then mortar was trowelled into place around the riser and the frameset in place to the correct height of the surrounding slabs and with a slight fall matching the rest of the patio. The slabs around the frame were cut using an electric tile cutter which had a water tray for the blade to suppress dust. Also, water was dribbled onto the slab while it was being cut. The operators wore face guards, face masks,s, and ear defenders. Type 1 was added around the frame and tamped down and then the slabs were set in place.

Enhance your property by laying a new patio – part #4

Convert your shady bare slope into a beautiful rockery