Finishing the patio and garden 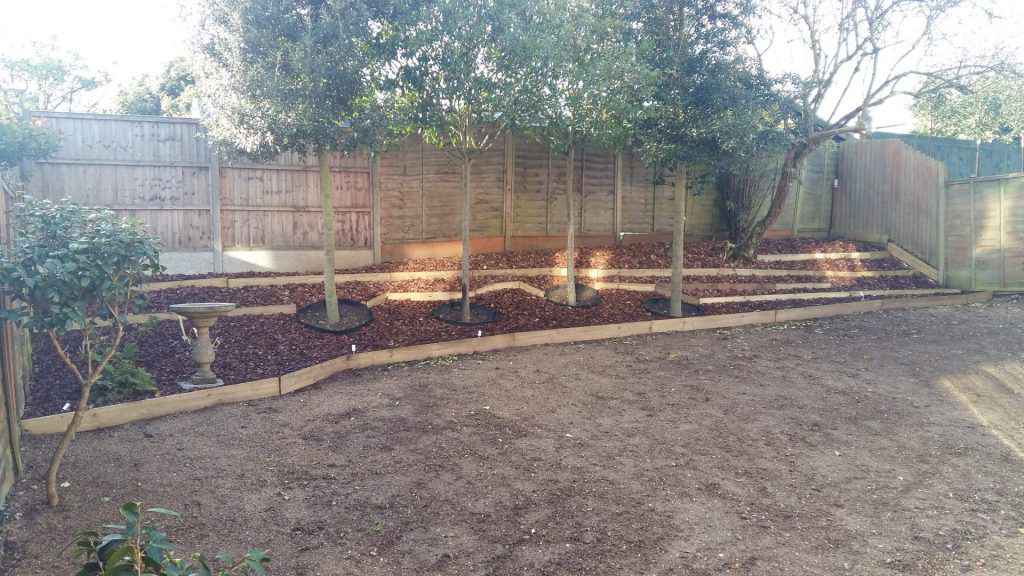 With the bulk of the major structural work that had to be undertaken around the property now complete it’s time to look at the parts of the garden in need of some design in order to integrate them into the overall look and feel of the landscaping performed so far.

To this end, the steep bank at the bottom of the garden needed some attention to turn it from a steep and fairly dull muddy bank that was a haven for weeds and not a lot else into something that encapsulated the rest of the garden was low maintenance and cost-efficient to achieve. The bank contains 5 trees that have previously been planted to give a screening effect for the houses behind. The trees are 2 Photinias’ or Red Robins, 2 Holme Oaks, and one Elderberry. They take a large amount of water out of the ground in the surrounding area so nothing really grows.

In one shady corner of the bank, we have planted some ferns and over the rest of the bank, we have put large chunky nuggets of play bark making sure that it does not contain too many finers ie small bits of chippings and mulch that would break down too quickly. In order to stop the bark from migrating downwards, terracing has been placed along the bank using gravel boards screwed to stakes banged into the ground. Be careful around the roots of trees when putting stakes in. The large bark nuggets stop it from being blown away in high winds as well as aid the retention of the bark on the steep bank and stop it from rolling down.

The premium play bark was purchased loose from a local merchant and transported in the back of a truck and borrowed into the garden.

Having given the slabs a really good clean with Jetwash and then mopped it down with a solution of natural stone grout and cement remover. At this point, the slabs still look very like they have a powdery residue and seem to retain dirt and dust quite readily.

To seal the slabs and enhance the color bringing out the dark natural tones of the slate an impregnating sealer has been used which will be absorbed into the stone but also protect them from spillages.

Enhance your property by laying a new patio – part #4