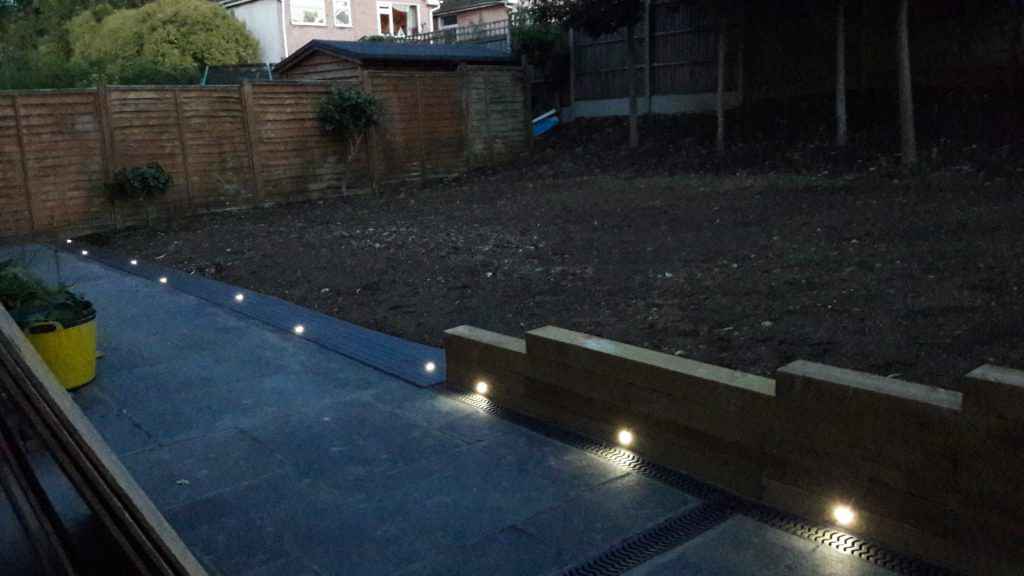 With the patio construction pretty much complete and now laid in the 3 major zones around the perimeter of the house (garage, kitchen/dining room, side return) it’s now time to start building the periphery parts of the hard landscaping.

Decorative stone was used to fill the voids around the guttering downpipes and down the gap between the paving slabs and the boundary fence that borders the side return.

With the sleeper wall already built in front of the garage patio area, to act as a retaining wall for the earth that forms the lawn part of the garden, the rest of the kitchen/dining room patio needs a border to edge the late slabs. To fulfill this requirement and to enhance the overall look of the garden a scheme was developed that involved laying some decking boards in two rows in front of the slabs on a wooden frame.

The frame for the decking boards was made up of 48mm x 74mm timber screwed to wooden piers that have been laid in concrete over a base of Type 1 and hardcore at 1200mm intervals. All the timber used is pressure treated and then painted with wood protection paint to extend the life of the timber. Flat timber screwed into the decking boards and laid on the patio was used to keep the frame in place while the concrete was set around the wooden piers. Once the concrete had been set the decking boards were screwed in place using stainless steel deck screws that would not rust and corrode over time with exposure to the elements.