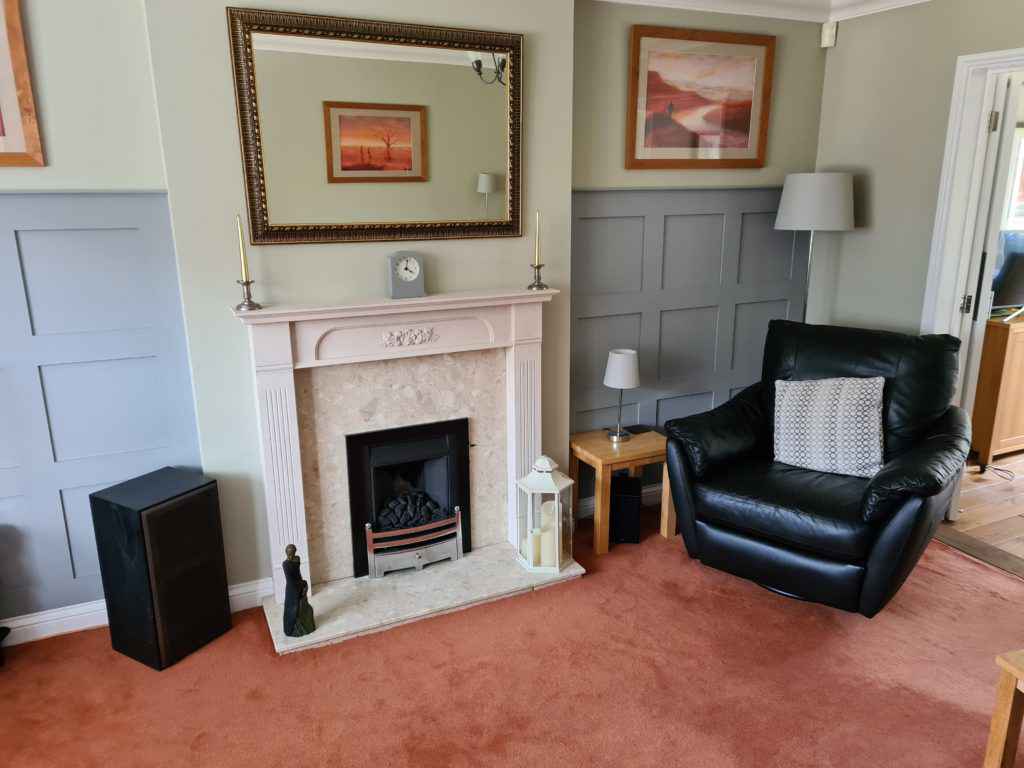 The addition of some structural relief to a feature wall can give a room the illusion of greater depth and height while also enhancing the richness of the room. One of the ways to achieve this is by adding a board and batten style cladding to the face of the wall, the amount of wall coverage is entirely a personal decision, you can cover the whole wall, halfway or as we have done, two thirds giving space to hang pictures etc. The ledge at the top (details of this will be described below) is just wide enough to stand a couple of picture frames on rather than affixing to the wall and from a viewpoint perspective, also gives a definite finish line to the cladding. The secret here is that we are only applying battens to the wall and not any boarding behind thereby giving the illusion of boards and battens while not actually applying any of the boarding. This makes the job simpler and easier to perform and also reduces the cost.

Before the battens can be applied to the wall the first job is to measure the area to work out the space of the battens across the wall, this is also the point where you decide the look of the finished effect. There are basically two choices for the orientation of the battens, i.e, vertically space the battens on their own giving a tall rectangular look or equally spaced vertical and horizontal battens to make squares. If you are opting for the square pattern then it’s important to make sure the width and height of a square is fairly consistent ie the width of each square is close to the height of each square. In our case the was a 2cm difference but this is small enough not to show. You can also make the top, bottom and side battens wider than the inside battens for a slightly different look but this does add to the complexity of cutting the battens.

We plumped for a square pattern with equal width battens all round so here is how we worked out the spacing. The width of each alcove we are battening is 145.5cm and 146.0cm respectively. This means we can have roughly the same number and size of squares on each side. The walls vary slightly in width vertically as they go up so there is always a tolerance. The internal size of the square is calculated by placing battens at each end of the area to be battened and then measuring the distance between them. We purchased a pack of ready cut battens manufactured from MDF from a big box retailer which makes things even easier. Don’t forget to wear a mask whenever you’re cutting up MDF.

Here is how to calculate the vertical and horizontal spacing. Our battens were 10cm wide so the internal distance between the two side battens at either end of the first alcove is 125.5. Work out the number of inside battens required which for us is 2 and subtract the total of their combined width being 20cm which gives 105.5cm. Now divide this by the number squares across which in our case is 3 gives a spacing of 35.1. For the horizontal spacing do the same calculation but this time the internal distance is measured between the top and bottom battens. If you are proposing to do horizonal battens then you will have to make a judgment call as to whether the square(ish) pattern that you end up with looks ok. If not then you may want to go with just the vertical battens on their own.

Next job is to make sure the wall you are putting the battens on has a nice flat surface. Fill any holes and sand down. Wear a mask when sanding. I also use a sanding attachment that goes on the end of a hoover for this job which helps keep the level of dust down.

Now if like me you have purchased your battens from a big box retailer then you just need to cut the top and bottom battens to length to fit all the way across the alcove. I used a chop saw to get a nice square cut edge but don’t worry too much about this as we will be filling any gaps with filler anyway so a hand saw cut is perfectly acceptable (Don’t forget dust mask and eye protection!). Place the bottom batten in place and use masking tape to temporarily hold it in position. I was lucky in that I managed to use an entire batten straight out of the packet as the height of the inside vertical battens without having to cut it to size but your luck may vary.

Offer the vertical battens up against the wall spaced as per your calculation above and again temporarily mask them in place. It’s important to make sure the vertical battens are straight using a spirit level. Then place the top batten in place and mask it to the wall. Stand back and make sure you are happy with the effect and then use a pencil to make the positions of the vertical battens. I found it useful to make up a template that was the exact size of the internal square space which made cutting and placing all the battens that much easier.

When you are happy with the layout remove the top and vertical battens from the wall. Now we will permanently install the bottom batten. Dab some grab adhesive on the corners and centre of each batten. You don’t need to use much glue just enough to hold it in position, this makes it easier if you ever need to remove them. I used a nail gun to pop pins through the MDF into the drywall but you can use a hammer to drive them in. These will keep the battens in place while the glue sets. Be careful not to use pins that are too long so as not to interfere with any electrical that may be buried in the wall.

When all the vertical and inside horizontal battens are in place apply the top battens. To finish off the look apply some scotia above the top batten. I used a 2.9cm by 2.1cm floor edging scotia to give a little shelf that could support some small picture frames. Now you can use some filler knifed into any gaps and then sanded down once dry.

Now its time to paint, we did two coats of undercoat on both the wall and boarding and then added individual colours.

A relatively simple and cost effective way to give a dramatic feature wall to any room.

You can also read – A HALLWAY THAT SHOUTS HELLO